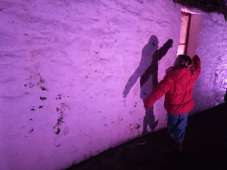 Guest lighting designers for a community arts project in the Shetland Isles that was a collaboration between Shetland Arts and NK Studio.

In February, my partner in crime Martin Lupton and I took on one of our first projects as our new outfit: Light Collective. In keeping with (Light Collective RULE #9 - Live it or leave it) the ethos of our new venture, we picked an extreme lighting challenge; guest lighting designers for a community art project devised by Nayan Kulkarni and Roxane Permar… in Shetland… (did I say) in February…

We casually agreed to participate in the ‘Mirrie Dancers’ project about a year in advance not really giving it any thought so when the date actually came round, I got scared. I am from South London. I am really urban. I don’t do rural. I don’t do cold. Where is Shetland anyway? I thought it was off the coast of Scotland but am shocked to find it’s actually nearer Norway and I stick my fingers in my ears when people mention ‘The Wicker Man’.

The project involved the selection of 12 final sites from a list of 300 suggested by the community as places of local, cultural or historical significance. Community groups with participants aged from 3 to 90 were also invited to make short videos that were created for streaming through the luminaires at each of the finished installations at the final sites.

Martin is tougher than me and already owns extreme weather gear but I strip the entire stock of thermal underwear from the shelves of Decathlon before we fly off to the end of the earth. We arrive to a gorgeous blue sky and crisp white knee high snow. How bad could it be I think? We are whisked off to our site which is only accessible by 4X4. We have a Renault Megane!

So this is our site, a derelict listening post perched on the edge of a cliff in middle of nowhere used in the 2nd World War to intercept German and Russian messages now home to sheep. Our equipment consists of 40 colour changing LED luminaires specially designed for the project by Nayan and powered by a wind turbine. Unusually though, on an island with no trees growing due to extreme winds, the day we arrive it is eerily still.

Before arriving, we had seen lots of online comment about the project in scary Shetland dialect regarding how little impact the lighting schemes made on the island. So thinking we can mitigate this, we went to have a look across the water at the main viewing point of the site and our hearts sank seeing how small the building looked within the epic landscape. Tiny luminaires, big mountains, high expectations…

Driving home from the site in a terrifying blizzard, we think things might get better. We now have wind and the Lerwick Tesco looks reassuringly familiar. We decide to try whiskey and stop blaming our tools and think of a plan. The next day in minus whatever, barely able to move in ten layers, we execute our plan. We have decided to not do what we had come to do which was to light the building but reverse its history and make the building a sending post. We are going to use the lights to send a message over the water. We are determined to make something that people can see so we set about mounting them on the roof carefully respecting the architectural form.

The weather changes, the wind turbine works, the lights have power but its scary on the roof and the lovely crisp snow is washed away to reveal knee high sheep shit. We decide to send a message that is a local poem about the ‘Mirrie Dancers’ and the seasons. It’s in Shetland dialect so we think it might endear us to the locals and then they will let us leave when we’ve finished. Mirrie Dancers means northern lights so the poem also informs us about the colours to use.

We spend 4 hours translating one verse into morse code so the lights can flash out the poem in authentic morse across the water. I become an expert in timings for dots, dashes, spaces and later that night feeling really pleased with ourselves we go and look at our ‘oh so clever idea’, sending a tweet on the way to say ‘the listening post is up and talking to the people of Shetland’.

Standing in front of the installation, Martin and I agree that it’s most definitely the worst thing we have ever done and perhaps we shouldn’t start a company together. It looks rubbish and is even worse when it changes colour. It looks like a ‘Phoenix nights’ style working mens club. Realising that the locals will start driving up looking for a beer and that the view from over the water is really bad, we send another tweet saying the listening post is now turned off. Good news for the Pharos team though – we have proven that their controllers work in -2°C when covered in frozen sheep shit.

After sleeping on it, we awake to heavy rain. We get to wear waterproofs today, hurray – a change of outfit! With nothing left to lose, we decide to ignore the architecture and just make a mega beacon and put all 40 luminaires on the tower of the building. After an arduous day of installation, we get a phone call from airport informing us that the one plane that came in last night complained and we are told that we cannot turn the installation on under any circumstances.

Laughing not crying, the team decides we have to move to a different site on a different island. We now have one day to light two buildings instead of the planned three for one site. We are given a small cottage and a ruined Lairds house opposite each other across an inlet of water. Encouraged by an indoor toilet and an oven we can sit next to, we decide to reuse the morse code idea (gotta have a narrative!) and base our scheme on a totally random story I tell about me and my friend Julie who lived opposite me when we were kids in the 70s and how we used to shine a light out of our windows to signal each other. See what happens when I leave my comfort zone. Martin must be losing it too because he likes the idea. We put a ‘Julie’ light in the cottage and a ‘Sharon’ in the Lairds house and they tell each other the poem with each verse signaling the other building to change colour.

We work so fast that photos are a blur but we do it in 10 hours. We install, focus, address and program two sites that are a 20 minute drive apart and as soon as the lights are on, locals start arriving on foot and by car. People take photos, draw pictures; one even says she is going to write a piece of music. There is a real buzz and best of all they like it. We can leave the island and head back to civilization knowing we achieved something against the odds and have completed our extreme lighting challenge. Lost: two gloves, one hat, five nails, six days, the fear of sheep shit… but a good time had by all.

Back to Making of Light